“Much is seen as a young, innocent character who is not too bright.”
~robin hood

Learn More About Much

Much is the epitome of what it means to be a Shiloh! He is fluffy, large and extremely docile. He is a beloved friend to all that he meets, especially children. Much has even been invited to a child’s birthday party. He is a couch potato who loves his jolly ball, his tennis ball, his pool and meeting new friends.

Update … our boy Much developed degenerative myelopathy around seven years old. Degenerative Myelopathy, also known as DM, is a progressive disease of the spinal cord beginning with a loss of coordination and weakness in the hind end. This manifests as a wobble when walking, knuckling over of the feet and gets progressively worse until the dog is unable to walk. The average clinical course can range from six months to a year. We did a lot of research and put together a “plan” that worked for us. With the help of that plan and a DM treatment protocol, Much battled the disease with valor. Much passed away in October of 2011 after a two year battle with DM.

To learn more about DM, and some of the resources we used, please visit the links below. 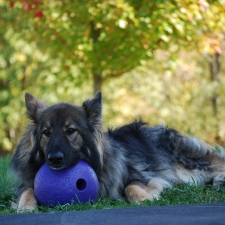 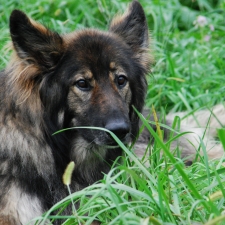